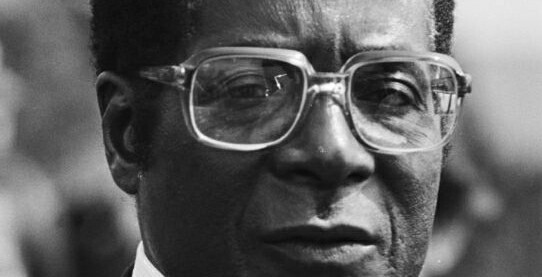 (This Biblical Parody was written about the life of Mugabe mainly for the fun. While you enjoy it, pay attention to verse 17, maybe there could be a lesson to ponder upon.)

1 And it came to pass that in the two thousand and seventeenth year, the ruler of the Kingdom of Zimbabwe was frail due to old age.
2 He leaned more and more on the counsel of his wife, Queen Grace.
3 Now, the Queen’s face is as comely as the tents of Kedar, as the curtains of Solomon,

4 but her heart is as cunning as a fox.

5 She thought to herself, ‘What stops me from ascending to the throne? I will do all in my power to succeed my husband.’
6 The people feared the Queen exceedingly, and whispered of her dark heart.
7 They said she told her maidservants, “Whereas my husband chastises you with whips, I will chastise you with scorpions.”
8 In the eleventh month, the King harkened unto the counsel of Queen Grace and deposed his second-in-command, Emmerson, son of Mnangagwa.
9 The princes of the Kingdom were struck with amazement.
10 The King’s cabinet murmured and murmured. The spirit of the Lord has departed from the King, they said, and his grace is no longer amazing.
11 But the King was unmoved and listened not to them anymore.
12 Queen Grace’s heart was lifted up in joy.
13 In the second week of the eleventh month, the words of Emmerson came to Constantino son of Chiwenga, the general of the king’s army saying, “hast thou not seen what that woman who calleth herself Queen of our Kingdom, caused the King to do unto me? Hast thou not seen how he forced me to flee to a strange land? Have I wronged him by my loyalty these one score and seventeen years? Behold, he is drunk deep from Grace’s bosom. I pray thee, brother, take action now lest the Queen moves against you and your household also.”
14 When Constantino the son of Chiwenga heard the cries of his friend, Emmerson, his heart grieved sorely, and he made haste to answer him,
15 “As God liveth, I promise thee my brother, the King’s action shall not stand. Far be it from me that this woman will rule over us!”
16 In great haste, Constantino sent emissaries to King Mugabe, saying:
17 “Oh, King, why hast thou dealt harshly with thy brother who fought by thy side against the British oppressors? Hast thou forsaken our brotherhood, which we formed in the bush when your wife was still in the womb? I beseech thee, oh King, do not let a woman come between you and your brothers.”
18 When the King heard the tidings of the General, he again sought counsel with the Queen.
19 Now, Queen Grace hated Emerson son of Mnangagwa with all her heart, for he stood in her way to the throne.
20 She tore her robes in anger, saying,
21 “Oh King, Constantino, son of Chiwenga has no respect for thee! Let the gods do unto me and more also, if you make not his life as the life of Emmerson this time next week.”
22 And with many such words, Queen Grace provoked the King and hardened his heart against his General.
23 The King then made plans to do to the General as he had done unto Emmerson.
24 Now, when Constantino son of Chiwenga heard of the evil that was to come upon him, he rallied his troops to rebel against the King.
25 On the 15th day of the eleventh month, the armies of the Kingdom of Zimbabwe encamped all around the city of Harare.
26 They seized the strongholds of the Kingdom, and seized also the Palace of King Mugabe.
27 Then they confined the King to his bedchamber until he had no other choice than to resign.
28 And the people celebrated, making merry and giving praise to the God who answereth them and delivereth them from Mugabe.