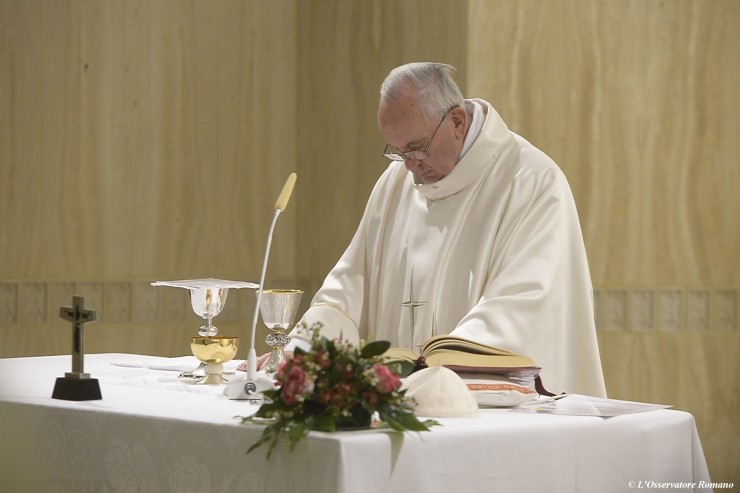 During Mass at Casa Santa Marta, Francis Stresses ‘Ugliest Thing’ Is He Who Thinks He Has ‘No Need for Forgiveness’

Even if one sins often, whenever one returns to God seeking forgiveness, he never needs to doubt he will be forgiven.
Pope Francis made this point during his daily morning Mass at Casa Santa Marta this morning, as he distinguished sinners from the corrupt, who “no longer see the need to be forgiven” and “don’t feel they need God,” reported Vatican Radio.
The Pontiff drew his inspiration from today’s first reading, which raccounted the story of David and Bathsheba. After David seduced Bathsheba, he found out that she was pregnant, and he hatched a plot to cover-up his adultery, including doing everything in his power to arrange the death of Basheba’s husband, a loyal man, by having him killed in battle and making it look like an accident.
“David is a saint, but also a sinner,” the Pope stressed, who fell on account of lust, but who God still loves him very much.
However, he pointed, we observe that when he arranges this murder, we see “a moment through which we all can pass in our life: it is the passage from sin to corruption.”
Corruption, the Pope acknowledged, “is a very easy sin for all of us who have some power, whether it be ecclesiastical, religious, economic, political… Because the devil makes us feel certain: ‘I can do it.’”
The Holy Father went on to warn against this moment in which the “attitude of sin, or a moment where our situation is so secure and we see well and we have so much power’ that sin ‘stops’ and becomes ‘corruption.’”
“One of the ugliest things” about corruption, the Pontiff underscored, is that the one who becomes corrupt thinks he has “no need for forgiveness.”
“Today, let us offer a prayer for the Church, beginning with ourselves, for the Pope, for the Bishops, for the priests, for consecrated men and women, for the lay faithful: ‘Lord, save us, save us from corruption.”
Pope Francis concluded, saying, “We are sinners, yes, O Lord, all of us, but [let us] never [become] corrupt!’ Let us ask for this grace.”