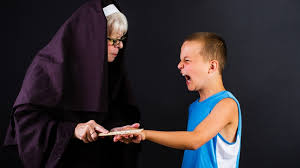 Spare the rod and spoil the Child: There was this intelligent young man who had one bad eye. It was at about the age of 20 he discovered the reason of his one-eyed. He was told that as a child he was playing with a stick. His mother saw him, ran and collected the stick from him.
Then he started crying ( which is usual of children). Then the mother felt that giving him back the stick will stop the crying. Indeed, he stopped crying and in the course of playing with the stick, he pierced one of his eyes. The harm caused by the stick left a regrettable, indelible mark on the boy. On hearing the cause of his predicament, the boy was furious and angrily threatened to remove his mother’s eye too. Then the young man said to her mother “if you have taken away the stick from me when I was a child, do you think I would still be crying?”

Parents! Spare the rod and spoil the Child