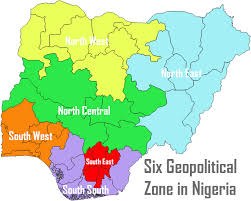 If Nigeria is restructured, it will be into provinces  such as;
1) Northern Province
2) 2) Middle Belt Province
3) 3) Oduduwa Province
4) 4) Eastern Province
5) 5) Niger Delta Province (Atlantic)
6) Then Central Government at FCT.
These write up will explore some Positive things restructuring Nigeria Will bring if the country is restructure

The Nigeria will develop primarily due  to inter-province competition

1. The first province to experience economic explosion would obviously be the Western Province. The Oduduwua Master plan will be revealed. There would be trans-regional 4g internet fiber connection/rail/subways/highways/power grids etc. Yoruba will become the 2nd official language. They are relatively united. They have oil. They own academia. They have mega corporations. The WP would be the first to have stable 24/7 power supply! Foreign money will flood the province. More Forbes recognized billionaires will arise. Some of them will be internet billionaires. Lagos will be relieved a little from overpopulation as railway lines from other states will make living elsewhere and working in Lagos a breeze.

2. The Northern Province will have stronger islamic laws. Sharia will be entrenched and this will make the NP become the least corrupt province. The middle east (Arab) nations will move in to partner with them, bringing major development. Jaiz bank and Unity Bank will become mega banks. Arabic and Hausa will compete with English for dominance in schools. This province will generate more solar power than any other province. After the west, this province will be the 2nd to have 24/7 electricity. They will start exporting food as a major revenue generator.

3. The Middle Belt Province will have a development conference. Focus will be given to solid minerals development/
4. exports, tourism development and food production/exports. This will become a food hub in West Africa. They will export more food than any other province. Mega mining and food corporations will arise. This province will have foreign inflows through tourism development greater than any other province. It will host the most beautiful places to live in Nigeria.
4. The Eastern Province will transform into the Auto Industry Hub of Africa. Indigenous manufacturing of vehicles that will start competing with foreign vehicles will commence in earnest. This will grow to manufacturing of airplanes, helicopters, tractors, cranes, heavy duty construction equipment etc. Forbes recognised billionaires living in Anambra will arise. The Biafra agitation will fizzle out since formation of the EP will be seen as a Biafra success in another form. There would be so much development that villages (as we currently know them) will quickly cease to exist. This province will be the first to semi-urbanize all their rural areas as all the Igbos living abroad will rush back to take advantage of the changes.

5. The Atlantic Province will take the Uyo blueprint and run with it. An abundance of oil wealth and opening up of major sea ports at Rivers and Uyo will enable this region to revamp their infrastructure quickly. There will be more monorails here than anywhere else. This will be the 3rd province to achieve 24/7 electricity generation in Nigeria (mainly from gas turbine technology).

7. Each Province will have their own airline professionally managed. And with better roads/rail, air and land transport costs will crash.

8. With the rapid development occurring all over, Nigerias GDP will shoot up. Obtaining visas to travel out will become easy as more people will want to come in than go out. A worldwide immigration into Nigeria will commence, as Nigerians living abroad will be struggling with foreigners to enter the country. ”Nigeria will become the most desirable Nation to live in”.

9. The central government at the FCT will become smaller and less powerful. There will be a mini-exodus from Abuja to the provinces as the action is now elsewhere. The outskirts of Abuja will no longer be heavily overpopulated. Abuja will become awesome again.

10. The 10th positive thing that would quickly happen positive idea.
Pls share for the sensitization of the benefits of Restructuring.