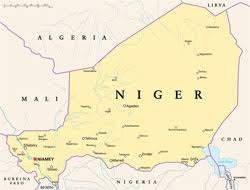 IS PRESIDENT BUHARI’S LOVE AFFAIR WITH NIGER REPUBLIC; A BETRAYAL OF TRUST?

“There is a difference between playing and playing game. The former is an act of joy, the latter an act” (Joy Nazarian).

President Muhammadu Buhari’s keen interest in Niger Republic may have metamorphosed into an ungodly romance; an indication that pretense has a way of uncovering itself. This is because, pretense is like a pregnancy that cannot be hidden for too long. It gets to a point, when it comes to the public domain/knowledge.

I think therefore, that the truth above may not be far from what now stares at the faces of Nigerians in the current administration’s likely betrayal of the trust reposed in them.

There is an African saying that, “A man who does not know where the rain began to beat him cannot say where he dried his body.” Unarguably, in the words of the renowned African writer, Chinua Achebe, “the rain that beat us as Africans began over four hundred years ago, from the ‘discovery’ of Africa by Europe, through the transatlantic slave trade, to the Berlin Conference of 1885…”(THERE WAS A COUNTRY).

Nevertheless, in the case of Nigeria, the rain may have started in 1914, through a forceful marriage of a creamy(oil) princess (South), to an arid(desert) prince (North), whose relationship with his relatives goes beyond the boundaries of a geographical space called Nigeria. Little wonder then that Buhari could go to any length to please his relatives, to the detriment of his wife, and her people.

Today, Nigeria’s foreign debt has risen so fast from 7billion USD in 2015 to 31billion USD in 2020. Yet, the current administration is building a railway of a whooping 1.9billion USD from Katsina, president Buhari’s supposed State of origin to Niger Republic. As if that is not enough, the same administration wants to take our crude oil to Niger for refining, while all the refineries in Nigeria are comatose.

When I read the announcement on April 24th, 2018, that the Nigerian government was collaborating with Niger, and providing funds for a refinery in Niger that would cost an estimated 2billion USD, I thought it was a joke. I felt detractors were at one of the destructive criticisms against the current nepotist administration. But you see, facts do not lie.

As I write this, I wonder if Nigerians are aware that on July 1st 2020, while the world was at the peak of the battle against the dreaded corona virus, the presidency appointed Ali Mohammed Magashi as a candidate for the post of Ambassador for Senate’s consideration? It was later uncovered that Magashi is a citizen of Niger Republic, whose brother Ahmadou Harouna is a serving member of Parliament in Niger.

Fellow Nigerians, have we also questioned why in August 2019, this administration claimed to have closed all land borders, but in the real sense it was only southern borders that were closed? If one is in doubt, one may find this interesting: In a recent article, Ochereome Nnanna wrote “Fatuhu Mohammed, a nephew of President Buhari’s, who represents Daura/Mai’adua/Sandamu Federal Constituency in the House of Reps alerted during a plenary session that smuggling was still freely thriving at the Daura border, 13 kilometres from Buhari’s country residence” (“Buhari’s unholy romance with Niger Republic, ” Vanguard News, by Ochereome Nnanna, November 25th, 2020).

In 2015, shortly after Buhari’s presidential inauguration, there was a party hosted in his honor at Niger’s presidential palace, and not in Daura. He was equally gifted a horse and sword, symbolizing conquer by a Fulani warriorr (cf. “Buhari’s unholy romance with Niger Republic, “Ochereome Nnanna).

The list of this administration’s questionable relationship with Niger is endless. Could there be more beyond the ordinary eyes? Absolutely! It is indeed a slap in the face of many so-called intellectuals on how a supposed illiterate or school dropout as alleged, has outsmarted them all. What a shame!

One of my biggest worries, however, is how appointed ministers from the south-south and southwest regions of Nigeria have become tools in the hands of the presidency in cornering their resources to fund projects of northern region, worse case, another country to the detriment of their people, and regions. What a shameless betrayal!

On September 27th 2020, Reno Omokri beautifully observed how Babatunde Fashola, a former governor of Lagos State, now a serving minister of this administration once expressed his shame/disappointment over the neglected Seme-border, Badagry road. A road network which he described as one with immense economic importance to Nigeria. One that generates over 55% of revenue on border relationship compared to a meagre 5% revenue on the northern border. Yet, as a serving minister of Works and Housing, Fashola on February 26th, 2020, announced an outrageous 81million USD to fund a road network linking Sokoto and Jigawa States to Niger Republic (cf. “Is President Buhari From Niger Republic as Has Been Rumoured?” THISDAY Newspaper, by Reno Omokri, September 27th, 2020).

Two former governors from the south-south region, Rotimi Amaechi of Rivers State, and Timipre Sylva of Bayelsa State, now serving ministers of Transport, and State for Petroleum respectively (both from the oil rich region of the country), are now as puppets coordinating the oil funds to provide railway for Niger, and to refine crude in Niger.

Today, president Buhari’s interest has shifted drastically from Nigeria to Niger. He seems to have completed forgotten that one ends with the suffix, “ia”.

Why is Buhari so bent on developing and enriching Niger Republic with Nigeria’s resources to the detriment of Nigeria? There is a popular saying that “Blood is thicker than water.” And if the claim below is true, then it leaves no one in doubt of the reason behind Buhari’s curious romance with Niger Republic.

According to Nnanna, “We have since learnt that Buhari is a first-generation Nigerian whose father, Ardo Adamu Buhari, a duck seller, had migrated from Niger, settled in Nigeria and married a Nigerian woman, Zulaihat” (cf. “Buhari’s unholy romance with Niger Republic,” Ochereome Nnanna).

Wake up Nigerians, this sleep is taking too long!

IS PRESIDENT BUHARI’S LOVE AFFAIR WITH NIGER REPUBLIC; A BETRAYAL OF TRUST?

Israel GodsPower ANAWEOKHAI is a Catholic Priest of the Missionary Society of St Paul.  At the time of writing this piece he is currently on mission in the Archdiocese of Douala, Cameroon.

Read Also; A NEW CRAZINESS UNDER THE APC LED GOVERNMENT OF NIGERIA (livealtitude.com)