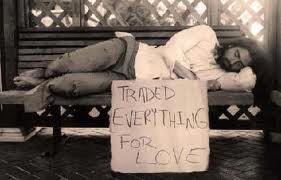 The Power of Love: Some years back when I worked in Ile-Ife in Osun State as a young seminarian, I made effort to visit and pray with any of my parishioners anytime I am informed that they are sick. In one of those visits, I met Tunde. He had malaria. Though he was taking his medications, but for three days he refused to take his bath or wash his mouth. He wore same clothes for three days (so I was told). He was a student of OAU, but had his apartment outside the school.

On the day I met him, after praying with him, I tried persuading him to at least take a warm bath. He told me he cannot, that he is so weak; besides, according to him, he is scared of pouring water on his body. I tried all I could, but it did not move him. He told me that I am not the first to persuade him and that no amount of persuasion will make him change his mind. So I gave up!
While I was still processing my inability to persuade him, one of his friends from school came into the room. He looked at me. He then moved to Tunde and whispered something into his ears. Immediately, Tunde jumped out from his bed as though there was fire burning beneath the bed. He rushed to the bathroom. He took his bath. Washed his mouth. Applied lotion on his body. Combed his hair. Changed his clothe. Wore a very lovely perfume that covered the entire house with a pleasant smell. Dressed his bed and laid on it with a gentle smile on his face.
As I watched everything, I was speechless and confused. I was asking myself, “What was it that his friend had told him about me that moved him this much?” Whatever it was, it worked like magic.
Tunde immediately dismissed me. He thanked me for coming. As I left, I saw life in him. I saw someone so refreshed. I saw smiles all over him. I was really happy. Within me, I was grinning from ear to ear and feeling as though I am Jesus whose presence could move anything.
As I stepped out of his house, something happened; something I never thought of.
I saw this gorgeous looking heartbreakingly beautiful damsel walking towards Tunde’s house. She met me and asked me where Tunde lives. I pointed to her the house and told her that she is at the right place.
At that instant, it was as though my eyes became open, and then I began to connect the dots: When Tunde’s friend came into the room and whispered something into his ears, it was not about me, he was simply telling Tunde that his new ‘girlfriend’ is on her way to his house. I later discovered from Tunde himself some weeks later, that he has been admiring the girl for about a year and was able to ask her out a week before he fell sick but she was yet to give him a reply.

As I left Tunde’s house that day, for the first time in my life I began thinking and asking myself, “is this how powerful love is?”

The definition of Love by King Solomon who was regarded as the wisest in the Old Testament began to fall in place. In Verse 6 and 7 of the 8 chapter of Song of Solomon he says “. . . love is strong as death, passion fierce as the grave. Its flashes are flashes of fire, a raging flame. Many waters cannot quench love, neither can flood drown it.”
You see ehn, people say that blood is thicker than water, and I say that love is thicker than blood. You know why? Love can heal. Love cannot only give life, love is life. People die quickly once love dies in them.
Okay! Let me allow you say what you think too. . .
Originally posted on Facebook
Photo courtesy: seekersofwisdom.freehostia.com
See Also; On The Shoulders Of Each Other – Life Altitude (livealtitude.com)