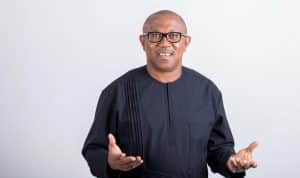 WHY PETER OBI CAN SAVE NIGERIA

Nigeria is at a crossroads. Nigeria today is a country in crisis. The education system is broken, and religious and ethnic divisions have widened. The country has been rocked by a series of high-profile corruption scandals, which have led to falling trust in the government and its leaders. This has become disastrous for Nigeria, which relies on good governance – along with the oil sector – to drive its economy. In such times, it is imperative that men of integrity step up to lead the country out of these challenges. We all want to see leaders who can save Nigeria instead of watching our national reputation deteriorate further under corrupt politicians and officials who care more about personal gain than the well-being of fellow citizens. But how exactly do we achieve this? This article seeks to highlight some of the challenges facing Nigeria and explains WHY PETER OBI CAN SAVE NIGERIA our country from further decline if he becomes president in 2023.

A corrupt government with no transparency

Nigeria is like a history book where corruption has been well documented. A number of shocking scandals have tainted the image of our country, robbing it of its potentials. An enormous amount of money is lost to corruption every year, which could be spent on improving education, healthcare, the building of factories to create jobs, the construction of infrastructures and other essential services. A lot of high-profile corruption has been taking place and more corrupt practices are still going on without any judicial intervention. Similarly, transparency International’s Corruption Perception Index has ranked Nigeria as one of the most corrupt countries in the world since 2012. The index measures the level of public sector corruption in 180 countries using a scale of zero (highly corrupt) to 100 (very clean).

Nigeria’s education system is in crisis, with underfunding and poor management resulting in a system that falls short of international standards. Schools are often dilapidated, with little or no electricity and few facilities. Teachers are poorly qualified, with many not being paid on time, leading to strikes and protests. Most Nigerian universities are on strike with the government paying deaf ears to their plights.

Religious and ethnic divisions are widening

Religious and ethnic divisions have widened in recent years, with Boko Haram’s insurgency in the northeast being used as a catalyst for increased tensions between Christians and Muslims. Boko Haram has been fighting an Islamic insurgency since 2009 and has claimed responsibility for numerous violent attacks in Nigeria, resulting in thousands of deaths. The group has also kidnapped hundreds from their residents, schools and churches.  Waylaying and kidnapping of travelers is also a sad phenomenon in their kidnapping spree.  One of the high-profile kidnappings that has become prevalent, is the kidnapping of clerics especially the Catholic priests.  Although some of the hostages are released after having payment of ransom, some die in captivity. The situation is becoming so alarming that people live in fear and trepidation. With all these restiveness, the Nigerians won’t stop blaming the government for failing to put an end to the violence. Nigerians need a leader who will call a spade a spade, and put an end to terrorism without no ethno-religion bias.

Obi frugality is a Gain for the Country

Peter Obi’s frugality is often used as an example of how the man is ready to lead the country with his simple lifestyle. But it is not just about a fancy house or expensive car. He has a simple approach to life, one that inspires people and earns the confidence of many Nigerians. If you look at his track record as governor, he didn’t use government funds to build the palaces and enrich himself. He did not own a house in any other city in Nigeria except his home town. He is the only governor that did not borrow funds to run his state. He is also the only governor that left lots of money in the state treasury after not owing any of his workers unlike his counterpart from other states.  He is still the only ex-governor that is not collecting pension after leaving the office. Obi’s record of frugality is outstanding because in Nigeria we have had so many corrupt governors who built mansions with public money and emptied the state treasury.  As a governor, he did not drive expensive cars, the car he drove can be bought by regular people. This kind of lifestyle speaks a lot about the kind of leader he will become if becomes Nigeria president. If Obi become the president of Nigeria, he will save money that can be redirected to improve other aspects of the economy.

Rebuilding the economy with more jobs for Nigerians

Nigeria has the potential to become a leading economy in Africa, driven by the oil sector. However, the government is failing to invest enough of this revenue into creating jobs for Nigerians outside of the oil industry. This is hampering the potential of other sectors of the economy, including agriculture and manufacturing. In order to achieve this, significant investment in key sectors, such as agriculture and manufacturing, is required. This will require greater government focus and investment, particularly in areas such as infrastructure. In his campaign, Obi has repeatedly talked about how creating jobs will serve as a catalyst for solving many problems in Nigeria including insecurity.

WHY PETER OBI CAN SAVE NIGERIA

Obi is widely seen as a competent and effective administrator, and he is credited with turning around the finances of Anambra State during his time as governor. He is now seen as a potential saviour of Nigeria, given his track record of success.

Many Nigerians are hopeful that Obi will be able to use his experience and expertise to help fix the country’s many problems. Nigeria is currently facing an economic crisis, as well as insecurity in the north-east of the country.

There is no doubt that Peter Obi has the potential to make a positive difference in Nigeria. He has already proven himself to be a competent leader, and he has the support of the people. If anyone can save Nigeria, it is Peter Obi.

Nigeria has a lot of potential, but it needs a new breed of leaders to harness it. The next president will face many challenges, but with the right experience and vision, the country can be transformed into a model of good governance and economic growth. Peter Obi is one of the few people who can save Nigeria. He is an honest and transparent leader, who is ready to make the necessary changes to steer our country in the right direction.

Atiku and Buhari and The Space In The Middle