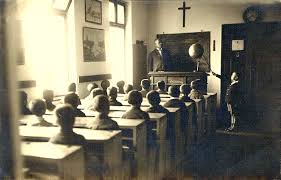 The Crucifix and the Young Boy. A young boy was notorious for always taking the last position at the end of each semester examination. In a bid to improve his performance, his father had to change his school.
At the end of the semester examination, he still took the last position. The father who wasn’t discourage continue changing schools for him, hoping that his performance would, perhaps, improve. After six attempt which prove fruitless, a friend suggested a Catholic school for him.
The man with his child, in the company of his friend visited a school called HOLY CROSS COLLEGE. At the entrance of the school, there was a big cross and someone hanging on it. The boy on sighting the crucifix smiled and placidly followed his father and his friend to the principal’s office.
Before reaching the principal’s office at some intervals
there were crucifixes hanging at some points in the school premises. In the principal’s
office the young man again saw another crucifix and smiled.
After meeting with the principal, he was admitted. At the
end of the first semester exams the boy took first position. The father who
could not hold his joy took the boy to the principal’s and inquired the magic
behind the remarkable achievement. The boy replied, “The first day I was brought to the school, at the
entrance, I saw a man hanging on the cross”. On getting to the principal’s office,
I saw another one. After my admission, in our hostel, there is one. Even in our
class room, there is one also hanging there. You see, I don’t want the same
thing to happen to me, so I took my studies seriously.”
photo courtesy: eideard.com