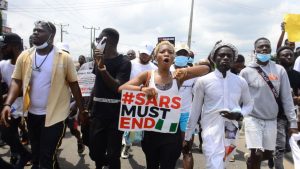 For the first time in my life, I have come to accept without doubt that power lies in the hands of the masses. And that was evident in the recent ugly events in Nigeria, following the youths #ENDSARS peaceful protests, and its aftermath.

Never in history has Nigeria as one united nation, but divided into several fronts, vis-à-vis, ethnicism, tribalism, religionism, nepotism, etc., caused by its governments witnessed such a united social consciousness against failures of governments. A situation that has resulted in the consciousness of a collective drive towards nationhood, led by our teeming youths through the #ENDSARS protests across the nation with a few exceptions, mainly in the North.

As a student of history, what is happening in Nigeria today is no doubt, a repeat of history, (a confirmation that history repeats itself).

In 1789, the commencement of the French Revolution saw the dethronement of Absolute Monarchy in France. A situation that witnessed the popular mantra; “equality, liberty, and fraternity,” which eventually occasioned a new phase in French history.

Several factors led to the famous French Revolution, and these factors are not far from what has led to protests, demonstrations, and in worse case revolts and wars, as witnessed in many countries of the world, with France as a prime example.

Nevertheless, before we consider these factors with France as a case study in comparison to the recent uprising in Nigeria following the aftermath of the #ENDSARS protests. It is important that we know that it gets to a point where social consciousness following the oppression of the masses could unavoidably result to upheaval. This is because, according to a popular African saying, a goat does not bite, but when a goat is pushed to the wall, with no option of defense left, the goat may be forced to bite. This saying confirms the assertion of Damian Ohagwa on revolts in a recent chat on the French Revolution. In his words, “The revolt of the masses against an irresponsible government. When you oppress a man to his breaking limit, you unleash the “brute” in him” (“On the French Revolution,” Damian Ohagwa, October 22nd, 2020). And evidently so, as history has shown.

1) History gradually repeats itself in Nigeria following the recent killings of innocent peaceful protesters by thugs and military personnel. Personnel alleged to have been sponsored by the governments to end the peaceful protests. But whose aftermath has seen the thugs/hoodlums gone out of hand, which has now metamorphosed into looting, burning of public institutions, and breaking into warehouses that house palliatives. The situations became more ugly because it resulted in stampede and increased crime with little or no end in view. But beyond thugs hijacking the situation is the social consciousness of the masses, which the factors leading to the current upheaval have resulted.

Now, let us examine two key factors that led to the French Revolution and put those factors side by side with the state of the Nigerian nation.

1. THE AGE OF ENLIGHTENMENT vs. THE AGE OF SOCIAL MEDIA*
*The Age of Enlightenment was the age that preceded the French Revolution of 1789. Although it took place years before the Revolution, its ideas were a key influence on the French Revolution. With the writings of great influential thinkers of the Age of Enlightenment. Thinkers like John Locke, Jean-Jacques Rousseau, and Baron de Montesquieu. In their works, they questioned the primordial authority of the absolute monarchy, where they strongly criticized class divisions of feudalism. With those criticisms, many began to question the authority of King Louis XVI who came to power without the support of many of the citizens within France. Class divisions and separations of power were equally argued against and for (cf. “CAUSES OF THE FRENCH REVOLUTION,” www.historycrunch.com).

In Nigeria today, the new Age of Enlightenment is Social Media. In our time, social media brought to light the abuse of power by our governments and the use of force to remain in power. Separation of power in Nigerian governments is massively abused by the extravagant lifestyles of executives, legislatures, and judiciaries to the masses’ detriment. With Social Media, articles and videos have brought such ugly reality to the public domain. Those who can’t read articles, are enlightened through videos on Social Media. And like in the factor leading to the French Revolution, many gathers in their various domains to discuss government failures and abuse of power, as seen in the media space.

With this consciousness, little wonder why masses have in recent weeks trooped out to protest against bad governments through the #ENDSARS code.

2. LORDS AND COMMONERS vs. POLITICIANS AND MASSES*
*Feudal system, also known as estates system, was another important factor that led to the French Revolution. In the 1780’s the population of France had reached about 24,700,000 (“CAUSES OF THE FRENCH REVOLUTION,” www.historycrunch.com). Consequently, the population was divided into three feudal units or estates system. The estate where a person belonged was very important because it was a factor responsible for a person’s rights, obligations and status.

While the first and second estates mainly the minority in numbers, but the privileged class consisting of nobles, and clergy occupied these estates and were exempted from taxation even while they earn more. With the majority, the third estate numbering about 98% of the population, consisting of merchants, lawyers, poor laborers, and ordinary peasants, paid most of the taxes. However, the peasants were neglected and looked down upon by the minority nobles.

Today in Nigeria, politicians collect millions of naira as monthly allowance, including wardrobes, newspaper, fuel, etc, allowances. They live in mansions, drive the best cars, own private jets, have their children studying abroad. They do not pay taxes, and even if they pay, it is never commensurate with what they earn.

On the other hand, over 90% populations are average income earners and those below poverty levels. They live in average buildings, others in slums, and many are homeless. Yet, besides paying humongous house rents and light bills that they hardly get. Governments tax officers from time to time embarrass them through forceful payments of taxation. Worse of all, their monthly wages cannot provide them decent living. This feeling of being crushed by our elites class, is obvious today in the aftermath of the #ENDSARS that has seen so much looting and breaking into warehouses, where many have loss their lives through stampedes. As, averred by Ohagwa, the brute in them is now being felt.

Finally, our politicians seem not to be learning anything from history. If they do, they would have known that massive poverty through absolute monarchy (absolute power) was very pivotal in the French Revolution. They should not forget that upon the commencement of French Revolution, there was massive looting, and prison break, where hundreds of prisoners in the Bastille prison were freed.

Is that not evident in the recent prisons breaks and warehouses loots?

In a nutshell, only fools fail to learn from history. And in the words of John F. Kennedy, “Those who make peaceful revolution impossible will make violent revolution inevitable.” A word is enough for the wise.

Israel GodsPower ANAWEOKHAI, is a Catholic Priest of the Missionary Society of St Paul. He is currently on Mission in the Archdiocese of Douala, Cameroon.